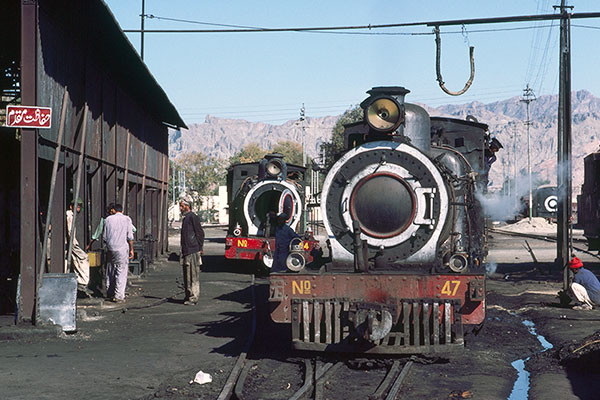 Caption - Pakistan Railways 2-foot 6-inch gauge G class 2-8-2 no.47 at Mari Indus loco depot together with no.54 (also G class). 47 was being prepared for the afternoon service to Laki Marwat. Mari Indus was the start of the branch to Laki Marwat where the main line continued to Bannu, and a branch diverged to Tank. At the time of this visit in November 1985 four classes were in use on the sparse passenger service - G, GS and ZE class 2-8-2s together with a few ZB class 2-6-2s. I met a man who had worked on the line in the 1930s when there was substantial traffic with six coal trains each day, two passenger services to Bannu and one service to Tank. In addition, there was considerable military traffic serving the garrisons on the Northwest Frontier with Afghanistan.