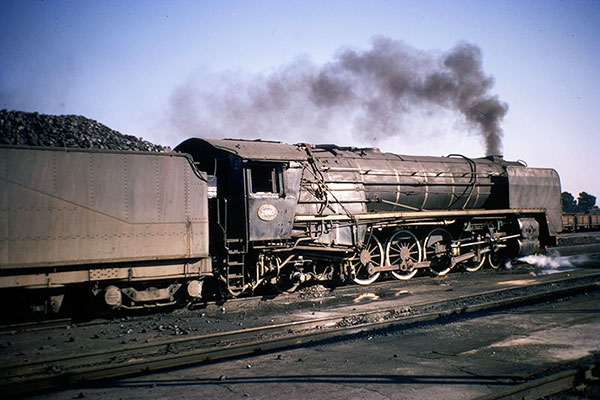 Caption - South African Railways (SAR) 15E class 2880 at Bloemfontein loco depot in October 1968. These we the first modern 4-8-2s that reflected Watsons thinking with RC poppet valve gear, standard boiler and sloping cab fronts. They also shared many features with the 16E 4-6-2s delivered around the same time. There were 44 15Es delivered in 1935 and 1936. They were built by Robert Stephenson (20), Henschel (16) and Berliner (8) and numbered 2858 to 2901. Originally based in Cape Town for the line to Beaufort West, they later moved north and by 1955 the whole class was based at Bloemfontein. A final move in the 1960s saw them working from Bethlehem until withdrawal in 1973. A number were sold to Mozambique and Rhodesia whilst a few ended up on industrial railways in South Africa. 2878 survived and was working steam specials in the 1980s.