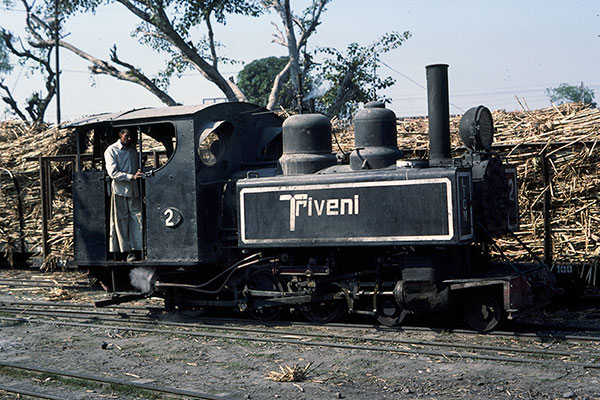 Caption - Upper India Sugar Mills at Khatauli purchased two 2-foot gauge Baldwin WD 4-6-0Ts. They were numbered no.1 "Lion" and no.2 "Tiger". The works numbers were 44699/1917 and 44656/1916. They remained as "Lion" and "Tiger" at least until 1980. However, after that no.2 (or was it no.1) was re-named "Triveni" as depicted in this image taken in 1982. However, there is some confusion about each loco's identity as over the years various parts were interchanged between the two locos! One loco is undergoing restoration at the Vale of Rheidol Railway in Wales and the other at the Leighton Buzzard Railway in England (information correct to July 2020).