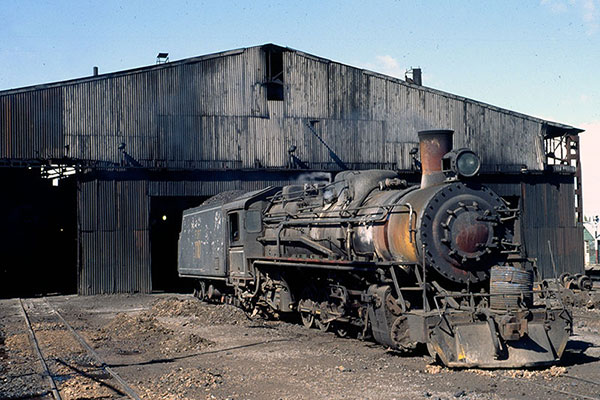 Caption - RFIRT 750mm gauge 2-10-2 no.110 at Rio Gallegos, Southern Argentina, in March 1996. The 255 km coal hauling line from Rio Gallegos on the coast to the mines near the Chilean border at Rio Turbio had 20 of these 2-10-s's. 101 to 100 were built by Mitsubishi in 1956 with a further batch numbered 111 to 120 delivered in 1963. The first batch were designed to haul loads of up to 1500 tons but with improved performance the later batch could handle loads up to 2000 tons. It is worth bearing in mind the grade to the port was predominantly downhill. L. D. Porta became manager in 1957 and initiated a raft of improvements to improve the performance of these locos. Later in his life Porta was involved in developing the Class 26 in South Africa.