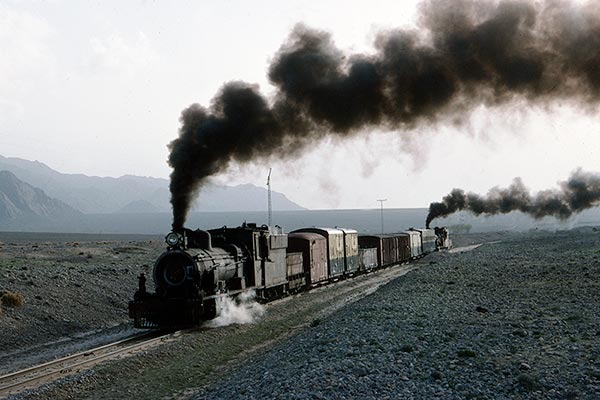 Caption - Pakistan Railways 2 foot 6 inch gauge line from Bostan to Fort Sandeman (Zhob) was 294 km long and crossed some wild and mountainous terrain. This image, taken in March 1979, shows GS class 2-8-2's 59 (leading) and 57 with an inspection special about 8km from Bostan. Both locos were from a batch of 7 built by North British in 1921. The line was unique in my experience in that rivers were forded rather than crossed by bridges! Located in Baluchistan, visits to the Fort Sandeman end of the line were officially discouraged as the line entered tribal territory. The service was infrequent and unreliable but spectacular. The line closed in 1985 and was dismantled in 2008.