The railways of Morocco are the finest in Africa. Built by the French the main route are electrified and the whole system has a French flavour from signalling to rolling stock. This journey takes most of a day and provides an insight into the country and its topography. We took first class tickets which offered excellent value for money and more comfort than second class which was quite crowded at times. Purchasing tickets at Marrakech station was easy and completed very quickly. The ticket also includes seat reservations.

The new station at Marrakech is modern and complete with all the facilities you would expect. The journey is split in two at Casablanca Voyaguers with just over an hour to wait between trains. Departure from Marrakech was on time at 0855 and it wasn't long before the conductor checked tickets. He was followed by a refreshment trolley with snacks, cold drinks and coffee. Leaving the city sprawl the single track line heads through some arid countryside with little sign of life. The terrain is such that the railway twists and turns through the landscape.

First stop was Ben Guerir where the station was being modernised. From here there was little change in the landscape but it still retained your interest. Heading almost due north the train kept to time and after further stops en-route arrived bang on time at Casablanca. Here the station looks grand but sadly the facilities are rather poor. The toilets in particular were best avoided. If you are planning to have lunch then the options are limited. 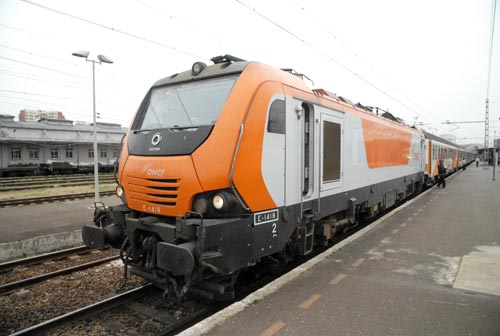 Photo - The train from Casablanca to Tangier

Boarding the train north to Tangier, we settled into our compartment. Departure was on time and we were soon rattling along the double track main line. Frequent stops including Rabat punctuated the journey with occasional views on the left of the Atlantic Ocean. The terrain had changed with more urbanisation, intensive agriculture and plenty of evidence of industry.

The route north from Rabat follows the mainline to Fes before leaving branching off north of Kenitra to take the recently constructed cut-off towards Tangier. The line is single track again and we lost a few minutes waiting to cross trains. The scenery becomes more European with intensive agriculture. The area is in complete contrast to the earlier stages of the journey where earthy colours predominated as vibrant greens are now the order of the day. However despite the scenic interest the country wide problem of litter everywhere still persists.

The line eventually follows the coast for a short section before making a long loop around the city of Tangier to reach the new modern station. Arrival was on time after about ten hours crossing the north of Morocco. We spent the night in Tangier before crossing the sea by fast ferry to Tarifa in Spain. A free coach transfer to Algerciras put us in position to take the afternoon train to Madrid.