This journey joins two capital cities and although not the most interesting journey in Europe it certainly has something to offer especially for the Hungarian sector of the trip. Bratislava hlavna stanica (main station) is by western European stations not very grand in terms of architecture relying more on the functional ability of providing for the basic needs of its passengers. For the first time visitor to Slovakia you might be surprised at the external condition of some of the rolling stock as an epidemic of graffiti artists has left many carriages plastered with spray paint. However, once on board, the trains are reasonably comfortable and reliable. 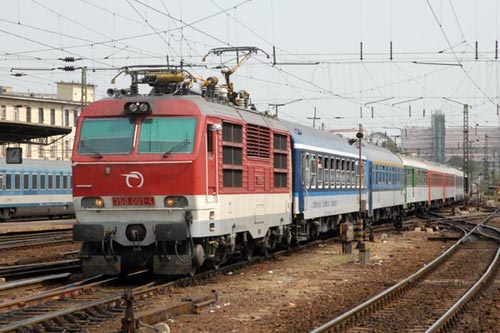 Photo - Budapest-Keleti station - Slovakian Railways (ZSR) class 350 no.350001 arrives with the "Avala" Eurocity train from Prague to Belgrade. This loco takes over the train at Breclav. The train will reverse here to continue its journey.

My chosen train was the "Avala" Eurocity train which links Prague in the Czech Republic with Beograd (Belgrade) in Serbia. Rolling stock is a mixture with Czech and Serbian Railways each providing some carriages. The restaurant car is provided by Serbian Railways and rather surprisingly smoking seemed to be condoned by the crew. Motive power for the journey is provided by Slovakian Railways so the consist is multi-national and reminding me of when many more trains like this operated throughout Europe.

By the time I boarded the train in Bratislava at 0954 the train had been travelling for just over four hours from Prague. Arrival in Beograd (Belgrade) would be some eleven hours from departure with the sector through to Budapest taking just under three hours.

With fares cheap by western European standards I opted for a seat in first class and was pleased to see there were few other passengers. A look at the map prior to departure suggested a seat on the right hand side when facing the direction of travel would provide optimum views.

Delays near Brno meant that departure was over 40 minutes late and as we headed out of Bratislava it seemed that there was no chance that this lost time would be recovered. Speed was leisurely as the train ambled across the flat land to the first stop at Nov é Zámky. Sure enough we had lost another five minutes, which had been further extended so we were 50 minutes late leaving Sturovo. As before the scenery is pleasant but flat.

After Sturovo the scenic interest improves with sight of the city of Esztergom away to the right. This city was once the capital of Hungary and occupies a strategic position on the far bank of the River Danube which forms the border between Hungary and Slovakia. A few minutes later the railway runs alongside the river and with warm sunshine outside there were many people enjoying the river and its sandy beaches. This area is very popular with Hungarians at weekends with the Danube-Ipoli National Park close by on the left. As we crossed the border the train slowed to walking pace as rockfalls due to heavy rain had blocked the track a few weeks earlier.

Arriving at the Szob, the first station in Hungary, it became apparent that Hungarian Railways have been better maintained than their Slovakian counterparts. We were now over an hour late. Progress was slow as we were stuck behind an all stations local train! Ah well such is life on the railway. Further glimpses of the Danube can be had to Vac where the last stop before Budapest is made. The approach to the Hungarian capital is not fast as the train navigates its way around the eastern side of the city to reach Budapest Keleti (east) station. What you do see is an interesting view of what life is like for most Hungarian city dwellers. Arrival was 75 minutes late. I stayed on the platform as the train was re-marshalled for its onward journey to Beograd with a Hungarian loco taking charge. Departure was 65 minutes late and with potential further delays I did wonder when the train would eventually arrive in Beograd.

Keleti station is an interesting terminus and is worth a few minutes exploration. Constructed in a variety of styles between 1881 and 1884 it was once one of the most modern railway stations of Europe. The main façade is adorned with two statues of James Watt and George Stephenson who both had pioneering roles in railway construction in Britain. Today the station retains its grandeur although its past glory is a little faded. A focus of international trains it remains an interesting place to watch trains with carriages arriving from many parts of Europe including Russia.