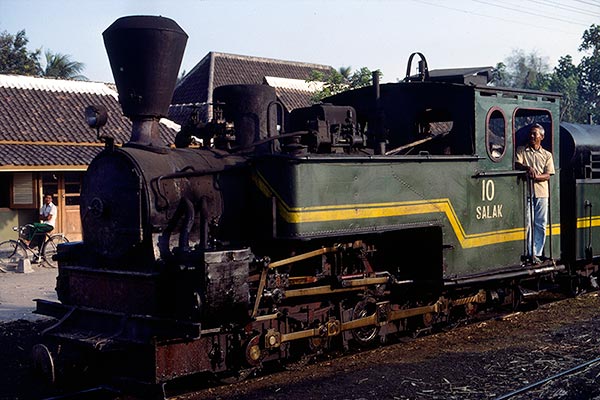 Caption - Rejosari sugar mill on the Indonesian island of Java was home to this unique 700 mm gauge loco. 0-8-0T+T No.10 "Salak" was built by Orenstein & Koppel (8090/1916) and features a jackshaft drive. The driving wheels are powered by a gear system (between the second and third axles) the top of which is directly driven by the cylinders. Still working in August 1982 what might be seen by some as mechanical nightmare managed to carry on working for nearly 70 years. Today, I believe, it can still be steamed for visiting enthusiasts.

Image - HDR (High Dynamic Range) software has been used to produce this image from 3 or 5 bracketed exposures. The camera was mounted on a tripod. In simple terms, the software merges the images using correctly exposed sections of each image to produce the final photo. This produces a much higher dynamic range of tones which would be impossible to achieve using a conventional single image.